Date
Year Round
Duration
3 - 4 hours
Price From
ZAR 1600
per person
Other Currencies +
ZAR 1600
Experience
Electrifying/ Adults; children 6 - 10 allowed on the boat; children 11+ years can dive
Enquire now and let us take you there

Get closer than ever before to these astonishing creatures

If the words “Air Jaws” and “Shark Alley” gets your adrenalin pumping then a shark cage diving expedition near Cape Town South Africa, will get you closer than ever before to these astonishing creatures. Situated between two islands that host a colony of over 60 000 fur seals and numerous birds, Shark Alley is one of the best places in the world for shark cage diving and should you wish to see a Great White Shark breach out of the water, which is famously known as “Air Jaws”, then Seal Island near Cape Town is the place to go.

Transfer from Cape Town or Hermanus to Kleinbaai to enjoy a delicious continental breakfast followed by discussion of current sightings, signing of indemnities, and issuing of wet suits and equipment before heading off on board the custom built catamaran with the “Shark Team”. A qualified paramedic and Dive Master accompany all departures. After being fully briefed on all procedures the crew “chums” the cruise area to attract the sharks. Usually 4 – 5 people at a time enter the cage and spend about 20 minutes face to face with the sharks. On board lunch boxes are hearty offering a variety of fresh sandwiches and assorted soft drinks. Return to the harbour and transfer back to the hotel.

For travellers who want more than just a once off thrill, one week expeditions are also available. During these expeditions travellers embark on White shark diving and viewing while also attending lectures, which include, amongst others, shark biology, behaviour, conservation, underwater filming and still photography. New found knowledge is put to use assisting in conservation and research projects working with sharks above and below the water. 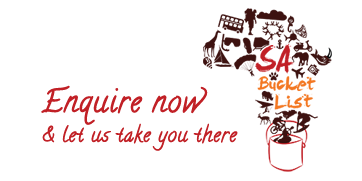 Starting Price ZAR1,600
Book This Tour
Enquire now and let us take you there
Date
Year Round
Duration
3 - 4 hours
Price From
ZAR1,600
per person
Category
Electrifying/ Adults; children 6 - 10 allowed on the boat; children 11+ years can dive